Team building: Why you need a clear and common goal It’s surprising, then, that there’s not more emphasis on explicitly outlining the core goals of a team prior to commencing any work. The issue is that there is often an assumption that all members of the team understand what needs to be done, and are approaching it with the same level of understanding and commitment. 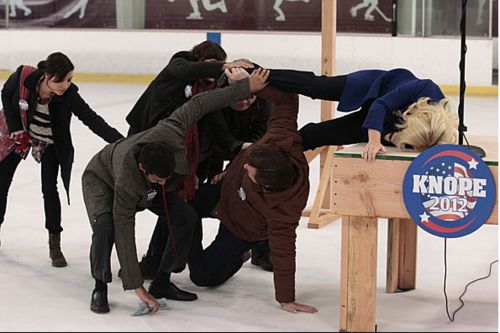 On NBC’s Parks and Rec, a lack of common goals goes awry. Source: NBC / Via borinq.com

Take, for example, a basketball team you start with your friends, to play in the local social league on weekends. It’s easy to assume that the common goal here would be to ‘win basketball games’. However, each member of your team may have goals that are variations on that. One person may believe that the goal is to make it into the finals, while another may believe that the goal is to simply not be at the bottom of the ladder. Someone else may have a goal of wanting to win, but not at the expense of fun.

Suddenly, you have a team of people that are approaching the goal of ‘win basketball games’ with wildly different levels of commitment and understanding – and this discrepancy can cause friction within your team.

The best way to combat this? Be very clear from the outset – before your team is even formed – of what your specific goals are.

When your team is first formed, spend some time to sit down with the entire team, and hash out what your goals are. For this example, let’s say you’ve formed a team in order to organise an event to launch a new product your business is offering.

There will likely be non-negotiable goals you’ll need to discuss with your team – things like timeframes, budgets and attendance. However, you’ll also need to discuss your secondary goals. Depending on your business and the culture thereof, those goals might be related to innovation, social media activity, publicity or community engagement.

By getting your team to openly discuss your goals and objectives, you’re ensuring your team can achieve great results as a cohesive unit.

>> Next: Encouraging versatility and bonding >>

<< Previously: Why your team needs structure <<