Leave accrual is the calculation of paid time off work that staff are entitled to under their award. There are usually several types of leave that are accrued with varying accrual rates.

Leveraging Ento’s award engine you can set different leave accrual rates and types on a per-award basis for staff who are entitled to take paid leave.

Ento currently supports the accrual of leave in hours, as generally Australian awards will accrue in hours.

Leave balances can also be stored and imported regularly in days instead for countries such as New Zealand that have awards utilising day-based accrual.

The standard balance in your account is saved in hours, however storing leave balances in days can be set up during your implementation or arranged by contacting our support team.

To view and manage your accrual rates, go to Payroll & Leave > Awards and click Edit on a selected award.

You will then be able to view any enabled leave balances and their corresponding accrual rates for that award.

Ento’s leave accrual engine can be set up to accrue leave based on a specific earning rate on a per-hour or per-day basis. For example, using a Public Holiday earning rate accrue TOIL for employees. 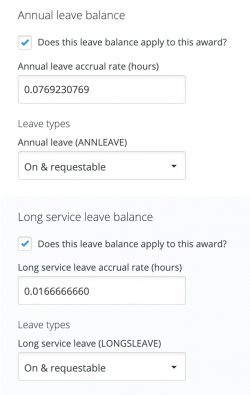 To learn more on how to ensure all your required leave types are entered in Ento and linked with relevant balances, head to our Leave types article.

Was this article helpful?