The cost of getting award interpretation wrong

Run a restaurant, cafe or retail business? It might pay to take a closer look at the rates your staff are getting paid.

Running a business can be a tricky undertaking. With so many things on the go, and so many rules to follow it’s easy to become overwhelmed. Fail to pay yourstaff correctly however, and you could see yourself with a fine and your business having to pay back thousands, if not hundreds of thousands.

Last month the Australian Financial Review reported that “more than 2,700 restaurant, cafe and catering workers have been underpaid $1.2Million in wages, with one in six of the underpayments related to weekend penalty rates, an investigation by the national workplace regulator has found.“ 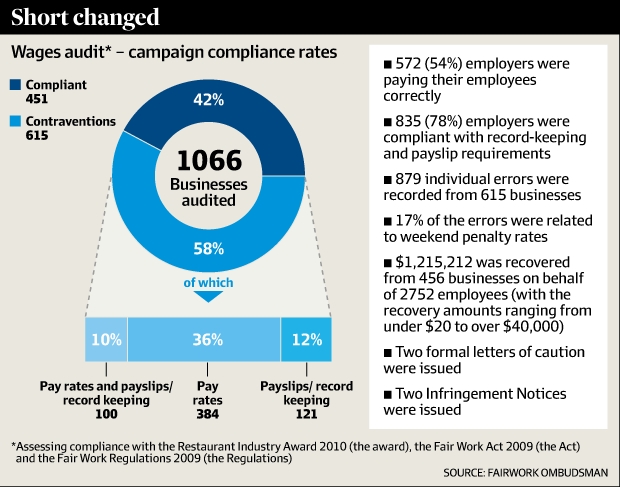 It’s somewhat unsurprising, considering the list of businesses undergoing audits and legal cases as reported in the media over the past year. Among the reports, are:

It’s a stark reminder for all business owners and managers to ensure their staff are paid the adequate amount, including penalty rates, and are given adequate breaks.

If you think paying staff hurts your cash-flow, think about what it’s like to have 90 days to pay back these amounts (with interest).

While there will of course be the occasional business owner who deliberately tries to dodge the law, these cases highlight the problem business owners face in being abreast of business law, adequate pay, payroll, breaks and rosters.

Unfortunately, thousands of businesses still run their rostering off Excel spreadsheets, or even worse, pen and paper. This obviously is not only an inefficiency (which can easily be resolved through workforce management systems), but it also leads to legal problems further down the track as the business scales, and things get missed – with the above examples case in point.

Things such as rostering, communication, time and attendance, breaks, awards, leave and unavailability, managing multiple locations, shift swaps, payroll integration and reporting, are all easily managed within workforce management systems (some even being cloud-based, such as our Ento app).

Instead of spending hours creating, managing and communicating rosters with staff, managers and business owners can easily create and manage everything within minutes using workforce management software.

And Ento will even help you to work out when staff are required to take breaks, when they have penalty rates or their availability, through pre-populated awards or custom award interpretation.

All of this helps to create a more efficient workplace and avoid costly fines or paybacks.

If you’re unsure of the rates you should be paying your staff, now is the time to review it. Pay rates and regulations will vary from year to year, country to country (and even state to state), so it’s important you understand and are compliant with various factors such as:

While you must comply with minimum standards, it’s also worth looking at offering additional benefits or perks to your staff, to boost morale, improve productivity and reduce staff turnover. The cost in offering these perks is often easily outweighed by improvements in productivity or savings in recruitment and training, so in many cases it’s a no-brainer. It even helps to create a competitive advantage among prospective staff.

For more information regarding workplace and employment requirements you can visit: