‘When I die, I want my group project members to lower me into my grave so they can let me down one last time.’

Back when I was a student, this joke was pretty much always guaranteed to get you a dozen or so Facebook likes – after all, the sentiment was something almost everyone could identify with.

Of course, the fact that this is such a universal experience illustrates the core problem with most teams – they’re cobbled together without any consideration to the personalities that make them up. If there’s a fundamental personality clash amongst your team members, your team is unlikely to produce the results you want.

In an article titled ‘How I Hire: Focus On Personality’, Virgin founder Richard Branson explained how when you have the right mix of people in a team, you have a far greater chance of success.

“Some managers get hung up on qualifications,” writes Branson in his missive, which has been viewed nearly 1.5 million times. “I only look at them after everything else. If somebody has five degrees and more A grades than you can fit on one side of paper, it doesn’t necessarily mean they are the right person for the job. Great grades count for nothing if they aren’t partnered with broad-ranging experience and a winning personality.”

While a great mix of personalities can be a prelude to success, you need to make sure there is still diversity in your team. Stacking your team with, for example, people who always say yes in the hopes of avoiding conflict may mean innovation and creative thinking is compromised.

Ideally, you’re aiming for a healthy mix of personalities, with no one personality type overrepresented. On his blog, US financial author and media personality Dave Ramsey writes about the DISC assessment test as a method of breaking down personality tests. 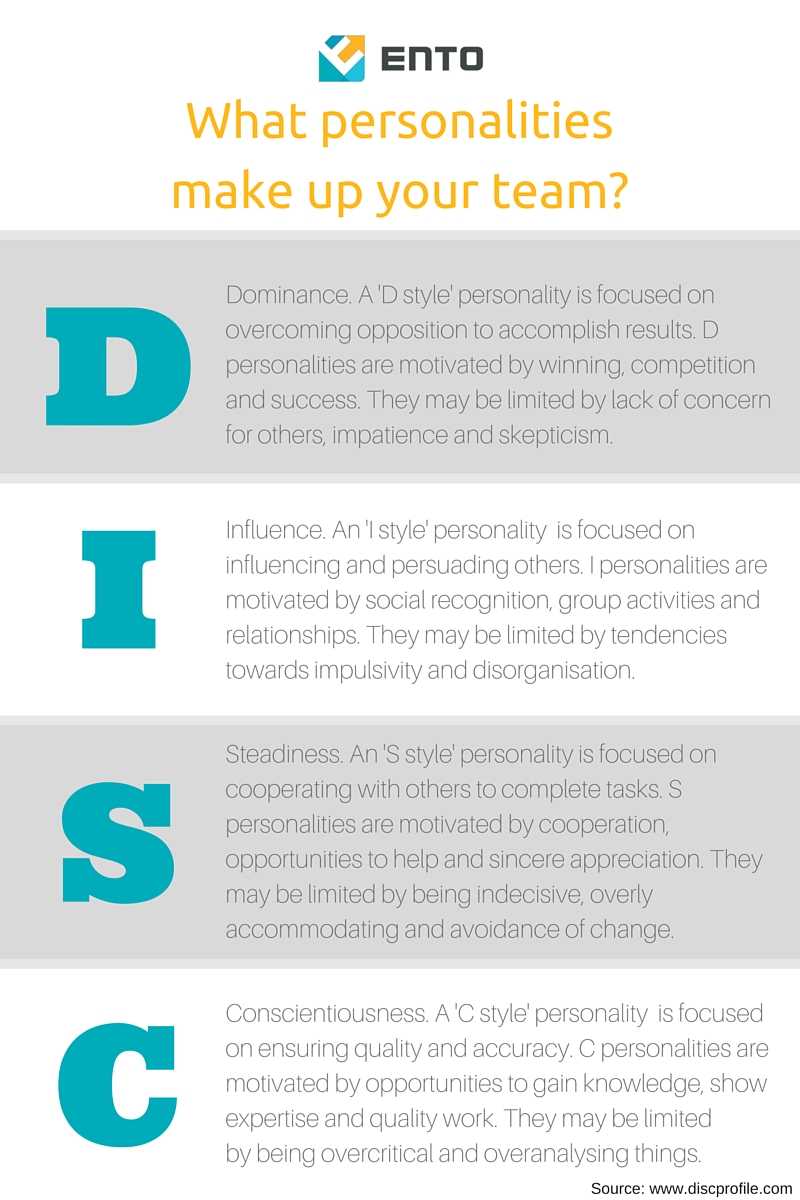 While DISC is certainly not the only personality test used in workplaces, it’s one of the most prolific, simply by virtue of the fact that it’s relatively simple – after all, it breaks people down into only four distinct personality types. Compared to something like the Myers-Briggs test, which breaks people down into sixteen different types, the DISC profile is a lot easier to work with.

Of course, no personality test is going to be 100% accurate. However, if you aim to stack your team with a balance of different, but complementary, personalities, you should see positive results.

>> Next: Why you need to start embracing diversity >>

<< Previously: ‘A camel is a horse designed by a committee’ <<

At Ento, we’re constantly building new features to help businesses of all sizes to build, grow and manage their teams – take a look at our current list of features here.