While social media has, in some iteration, been around for close to 20 years, it didn’t begin to hit the mainstream until the mid-2000s, when Facebook became a platform for everyone, not just college kids.

Since then, social media usage amongst adults has skyrocketed, with the biggest jump in usage happening between 2006 and 2010. And as social media became popular with more than just the college crowd, businesses and organisations were faced with an entirely unfamiliar challenge – how to handle social media usage by employees.

If you cast your mind back to the mid-to-late 2000s, there was something of a moral panic concerning social media use in the business world. Employers were concerned about the hit to productivity increased social media use might cause, as well as the possibility that employees’ behaviour online could reflect poorly on the business they worked for.

(For what it’s worth, the infamous 2005 ham sandwich email fight between two secretaries at a law firm in Sydney proved to us all that you don’t necessarily need social media for a good story to go viral, though it certainly makes it easier.)

At any rate, the increasing popularity of social media, and the perceived risk of that popularity, drove a number of businesses to develop social media policies, in the hope that they could enact some control over what their employees were saying or doing online.

But do these social media policies actually work?

In June this year, Pew Research released the results of a survey they conducted to investigate the ways in which social media is affecting the workplace. This survey, of over 2000 American adults, looked at the ways employees use social media at work, and the different ways in which businesses approach the issue.

However, the existence of these policies does not seem to act as a deterrent to social media use – regardless of policies, 77% of employees surveyed still use social media. 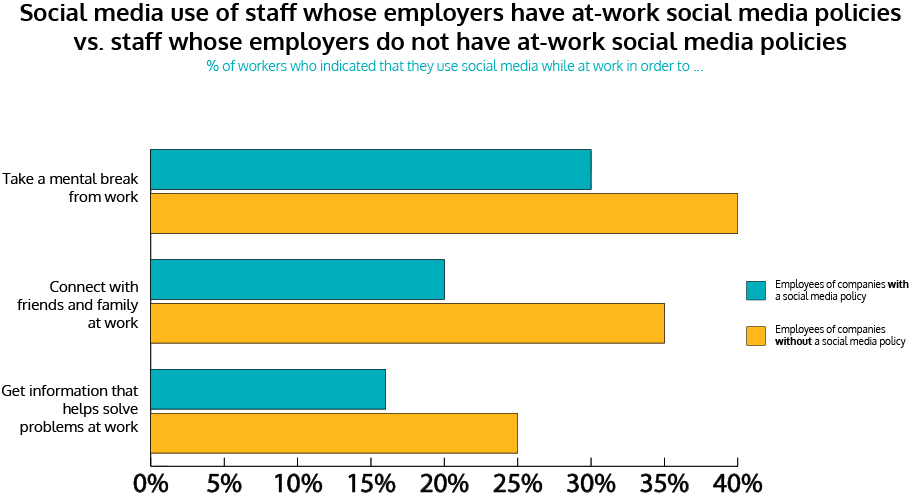 It’s clear, from the above graph, that social media policies are somewhat effective – at least when it comes to reducing usage at work. For some businesses, that fact alone may be enough to warrant creating and implementing a social policy.

However, if those numbers aren’t quite enough to convince you, consider the legal and cultural benefits of implementing a social media policy in your workplace. A solid, well-considered social media policy may not curb how much your staff use Facebook by all that much, but it can:

The legal implications of not having a social media policy in place are particularly concerning. In the 2012 landmark case of Linfox Australia Pty Ltd v Glen Stutsel, the Full Bench of Fair Work Australia (FWA) found that an employee who had posted inappropriate comments about his employer on Facebook, and was consequently terminated, was found to have been unfairly dismissed, in part because the employer did not have a social media policy in place.

While it’s easy to put something like a social media policy on the backburner, the outcome of Linfox v Stutsel shows us that Australian employers need to be proactive in implementing and managing policies pertaining to social media use by employees.

Your social media policy needs to be comprehensive, consistent with existing policies and lawful. The following resources offer great information about the legalities Australian businesses need to consider when drafting social media policies:

It may be that you never need to refer to your social media policy when dealing with employees, but think of it as that coat your mother always insists you take with you when you go out.

It’s better to have it and not need it, than need it and not have it.